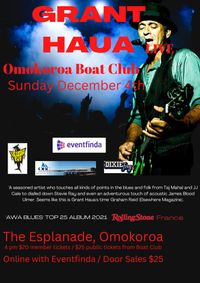 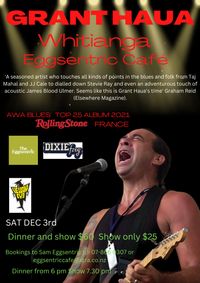 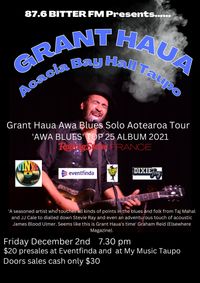 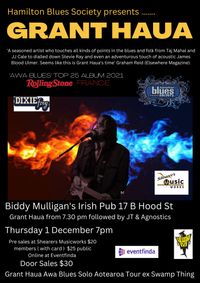 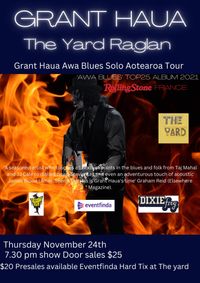 $20 Presales available Eventfinda Hard Tix at The yard, 25 on the door 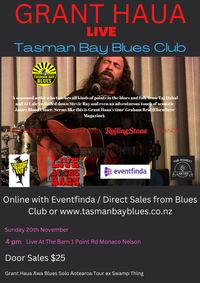 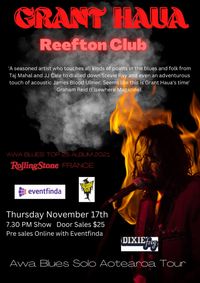 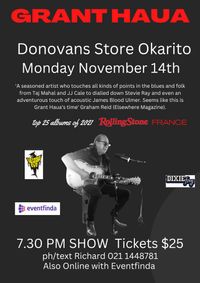 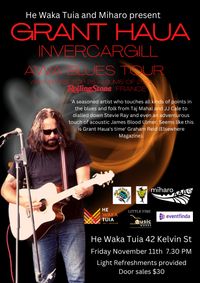 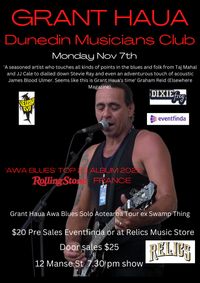 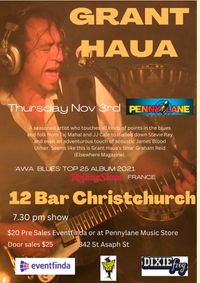 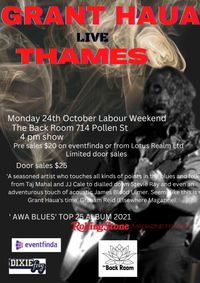 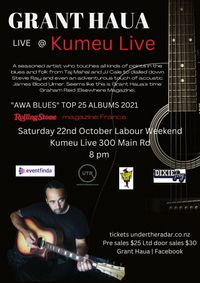 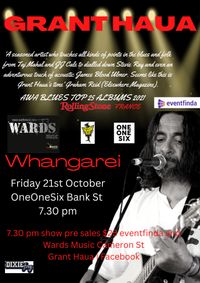 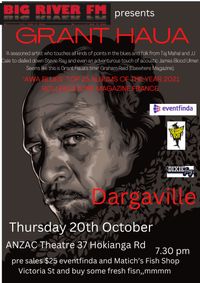 There were a few driving concepts for this album, for starters it was long overdue. It had been 10yrs since my last solo album and for some reason 10yrs seemed like a good reason to do another one!

On the last album all the songs were first takes. I'd practice twice, then record the third. No overdubs. That would be the final take. That was the kaupapa (stage) for that particular album. It worked well because with that approach there's a rough and real honesty in the songs that people can hear and makes them easier to relate to. (I hope so anyways)

On this album I wanted to take that attitude a little further, keep it acoustic but add a few extra instruments, spend more time  polishing the individual tracks, yet try to maintain that rough integrity. and hopefully potentially play some good stuff.

I have quite a relaxed view to songwriting, I'm not a fan of overthinking songs, that can lead to a mind f#ck of your own making, and that's not conducive to quantity let alone quality but lucky for me I've always been an avid reader, (mostly fantasy novels) which tends to expand the vocabulary a little and really helps when you're trying to drum up lyrics without overthinking them too much.

Some songs start to take on a life of their own once the recording process starts. ''Addiction'', for example is a song I really wanted to do justice, It's one thats been bouncing around in my head for a long time and it has personal significance. It's a relatable subject to many and it's a ''relationship in peril'' song,,,a ''boy losing girl song because of too much drugs n alcohol (classic country music stuff)'', all the trappings of a good blues or country song methinkith

It wasn't until I started recording the songs that I discovered all these driving narratives within the tunes were written for the most part on auto pilot,,, without thinking too much, they tended to be honest lyrically, covering a lot of narrative ground without really knowing exactly how, but that didn't matter because with this approach at least I knew the why.

In the song, ''This is the Place'', the emotion I felt when I recorded the first vocal really took me by surprise. I almost choked up singing that song because I was so immersed in it, it dragged me in. I was getting flashbacks of my mum, of old childhood friends, my wife and kids, my dad, the whole deal. It was unexpectedly intense but gloriously genuine, you can't fake that shit. It's the good stuff! Incidentally we kept that take-the first take, and that's what's on the album.

Recording ''Tough Love Mama'' was a similar experience, but not so intense, more humor orientated. We had fun on that track and that playful approach was exactly what was needed.

Tapping into personal experiences/ relationships can lend a lot of weight to a song but it's we how translate those experiences that makes or breaks them. Songs like ''Devil is a Woman'', ''Keep on Smiling'' , Got Something if you Want It'', Mamas Boy'' all have humorous undertones. I essentially took the same approach I did on ''Tough Love Mama'' for them.

For songs like ''My Baby'', "Better Day'' and ''Be Yourself',' I took the approach similar to ''Addiction'' or ''This is the Place''. All these songs have different subject material, but all are basically recorded with the same attitude in mind. If there wasn't a close personal connection to the song it didn't matter, as long as I took the same approach.

Fortunately for me the other musicians, Tim Julian (engineer, keyboards, shakers, bass), Grant Bullot (Harp), and Jesse Colbert (Double Bass) nailed the sentiment of the album to a tee.

The feeling and imagery I'm trying to convey in this album is pretty simple. I'm a huge fan of simplicity. I like simple but great food. I want a song to be as satisfying as a Sunday roast cooked by your Mum, a tune as good as eating big fat oysters straight from shell, and guitar picking as good as sipping a cool beer on a hot day.

I want the listeners of this album to feel like they're guests in my home and like the songs my home is pretty simple but it's warm, cozy and friendly. You don't have to take your shoes off when you come in and you just help yourself to anything. The kettles just boiled or there's a cold beer in the fridge. So welcome. This is my place. Kia ora koutou

Grant is a “salt of the earth” kind of guy. When we put together a bio for him he said “Nah man. I am a just a guy with a guitar. You need to tell the story straight”. So who better than to tell his story than the man himself - the following is Grants bio, straight from the horse’s mouth. - DF Records

I picked up guitar when I was 13, my younger brother had got one for Christmas the year before and I noticed he was already starting to get admiring glances from the girls at our school, I said to myself "dam I need to learn the guitar too", but unfortunately for me my brother was a better looker and player than me, so it didn't work out as well as I had planned, but I've been playing ever since.

I like to think I've paid my dues, but its hard to tell growing up and gigging in a small but beautiful country like Aotearoa New Zealand, being based in a town with a population of barely 100,000 one often wonders about overseas acts to see where you stand, for me its not about being better than this act or this band, its about putting on a show that can stand up alongside them, seeing and feeling the enjoyment of the crowd, that's the real payoff (and sometimes the only payoff!)

I've been the primary singer/songwriter/guitarist on 7 studio albums and 2 live over the years, my first solo album "Knucklehead" released in 2010 got good reviews in "NZ Musician" resulting in an article on the album, it opened a few doors for me on the local circuit one thing led to another and I ended up meeting percussionist Michael Barker [Neil Finn, John Butler Trio] and we hit it off straight away and formed "Swamp Thing" and for the following 8 years we wrote and toured regularly.

Mike was already a veteran in the industry, the benefits of him being in bands that have done big TV shows like Letterman and Leno soon became beneficial, straight off the bat we were doing festivals that were tough to get on, and after a few years we were headlining festivals both here and in Australia. Slowly we progressed to bigger stages like Womad (NZ), Womadelaide (Aus), Woodford Folk Festival (Aus), Bridgetown Blues (Aus) and Electric Avenue (NZ). It was on these stages we really excelled, often selling more cds than the more well known headline acts. After our Womad 2017 performance in New Plymouth  we occupied both the 1 and 2 spots for album sales in the NZ charts.

In 2016 we were invited to Louisiana by Baton Rouge Arts Society. It seemed like every musician there was a stone cold killer, so by the end of that tour we were a much more rounded 2 piece I reckon, we made many valuable friends and contacts, some we've brought over for shows in NZ.

In Jan 2019 after 4 albums and many tours through Australia and New Zealand I made the difficult decision to depart Swamp Thing, I've focused on the music I really enjoy, soul music, and things are all good, my 2nd solo album "AWA BLUES" was a Top 25 album of the year in Rolling Stone magazine France in 2021, it opened up touring in Europe for me, getting a gig on the iconic German Music TV show Rockpalast was a highlight. I'm currently with the small but almost family French label DixieFrog and I couldn't be happier having released 3 albums thus far under thier banner,,,and I'm still trying to learn the guitar.